GEAR UP IN STYLE

Buy in-store or online. We deliver!

WE HAVE OVER 40 YEARS OF SCUBA EXPERTISE

With over 40 years of scuba expertise, you can shop confidently with us.

We only sell the highest quality products on the market. 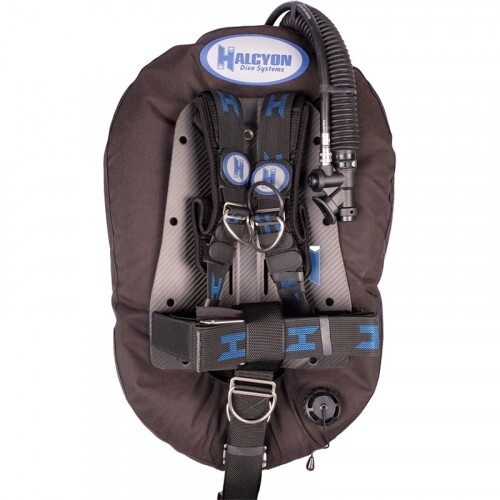 The Halcyon Adventurer Pro BCD is a Carbon Fiber Backplate System that is a lighter weight single tank system based around the Traveler Pro BCD with the best selling Halcyon Eclipse wing but done better.

The Adventurer Pro offers divers a specially designed carbon fiber backplate that does not require the use of a separate single tank adapter.

The new Pro Carbon Fiber Backplate features the best selling Halcyon Cinch Harness which is cleverly built directly into the backplate rather than having to use the current cinch harness mounting plate as found on the Halcyon Infinity BCD.

Halcyon has taken the development and innovation another step ahead of the rest with this amazing leap forward.

Both the carbon fiber backplate and wing have webbing slots, allowing the direct use of supplied cambands (with Octogrips) around a cylinder. The backplate itself is shaped to fit snugly against a cylinder eliminating the need for a separate adapter. The specially designed waist level webbing slots allow easy adjustment of the harness length/size while on or off the diver, letting the webbing “roll” through to desired tightness, similar to the functionality of the previous Cinch system. This design reduces overall weight of the system and makes it travel friendly.

The whole system includes a Halcyon Eclipse Wing with pre cut holes for the cam straps, to thread through as well as the carbon backplate Adventurer Plus backplate.  Plate comes complete with standard single loop harness and choice of stainless steel or aluminum hardware, MC Storage Pack backplate pad and an the ever popular Halcyon ACB10lb Active Control Ballast integrated weight system.

Save this product for later
Display prices in: CAD